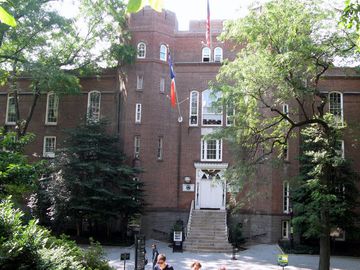 The Central Park Arsenal is older than the park itself. It was built in the middle of 19th century, with allusions to the Gothic Revival Style, as a munitions storehouse for the New York State National Guard. Its fortress-like appearance with towers and stacks of canon balls placed over the main entrance certainly demonstrates its military purpose. However, the building soon lost its role as a defensive compound when it was incorporated into the park. After that it was a police precinct, a weather bureau, New York's first Museum of Natural History, as well as an appendage of the adjacent Central Park Zoo.
Today the arsenal houses the New York City Department of Parks and Recreation and the Central Park Wildlife Conservation Center. It exhibits photographs of the park taken in the 19th century, as well as the original Central Park plan, the Greensward Plan, drafted by architects Frederick Law Olmstead and Calvert Vaux. The arsenal also organized fine arts and photography exhibitions dedicated to the natural environment, urban issues and parks history.