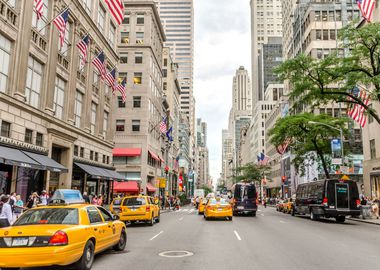 Fifth Avenue is one of the longest thoroughfares in New York City. It is also one of the most popular - second only to Broadway. It is home to a vast collection of outstanding museums, expensive retail stores, prestigious office buildings and luxury residential towers, all of which have made it a coveted destination for art lovers, fashinistas and the international jet set.
The one-way, southbound avenue begins at 142nd Street in Harlem and proceeds down to Washington Square Park in Greenwich Village for a total of 136 streets. Fifth Avenue is also the avenue that in terms of addresses separates east and west Manhattan. The numbered streets assume an east or west prefix depending on their respective position on either side of the avenue. For example, 42nd Street becomes East 42nd Street to the east of the avenue and West 42nd to the west. The building numbers increase in both directions as you move away from the avenue.
The section between 105th and 82nd Streets on Fifth Avenue is known as the Museum Mile, even though it is actually three blocks longer than exactly one mile. If you are a culture-vulture in New York, the Museum Mile is definitely the place where you will find the finest carrion. This stretch contains the greatest concentration of art and culture in the world. Traditionally, nine museums had been located in this part of the avenue, but in 2009 a tenth was added, the Museum for African Art at 110th Street. The other nine museums are: El Museo del Barrio at 105th Street, specializing in Latin American and Caribbean art; the Museum of the City of New York at 103rd Street; the Jewish Museum at 92nd Street; the Cooper-Hewitt National Design Museum at 91st Street; the National Academy Museum and School of Fine Arts at 89th Street; the Solomon R. Guggenheim Museum at 88th Street; the Neue Galerie New York at 86th Street, specializing in early 20th-century German and Austrian art and design; the Goethe-Institute German Cultural Center at 82nd Street; and last but not least, the Metropolitan Museum of Art on 82nd Street. Although many people - tourists and residents alike - think that the Frick Collection on 70th Street and the Museum of Modern Art on 53rd Street also fall into the Museum Mile section, officially they do not.
The area between 96th and 59th Streets on Fifth Avenue is also known as Millionaires Row because at the end of the 19th century the New York elite built mansions on that part of the avenue overlooking Central Park. The most prominent mansions that are still standing today are the Felix M. Warburg House on 92nd Street, which is used for the Jewish Museum, and the James B. Duke House on 78th Street, used by the New York University's Institute of Fine Arts. Other mansions were demolished and substituted with apartment complexes.
Fifth Avenue is also the shopping heart of New York City. In the 1990s the stretch between 57th and 49th Streets had the priciest retail space in the world. For a couple of years in the 2000s Fifth Avenue was considered the most expensive street in the world in terms of corporate and residential real estate. The prices of the luxury penthouses in that part of the city are as vertiginous as the buildings themselves. Fashion victims will find themselves in paradise as they saunter down the avenue starting at 58th Street. There is no luxury brand in the world that does not have an outlet on this one-kilometer tract of land. For more variety there are also luxury department stores such as Bergdorf Goodman on 58th Street, Saks Fifth Avenue between 50th and 49th Streets and the Lord & Taylor flagship store between 39th and 38th Streets. There is also extravagance for children: on the corner of 58th Street stands the world-famous FAO Schwartz, which sells the coolest toys on the globe, making fantasy become reality for the little members of the family.
Several National Historic Landmarks also stand proudly on Fifth Avenue: the St. Patrick's Cathedral between 51st and 50th Streets, Rockefeller Center between 50th and 49th Streets, the New York Public Library between 42nd and 40th Streets, the Empire State Building between 34th and 33rd Streets and the Flatiron Building on 23rd Street.
But the avenue's popularity does not stop here. Fifth Avenue has been the traditional route for several annual parades, such as the St. Patrick's Day Parade on March 17th, the LGBT Pride March on June 28 and the Puerto Rican Day Parade on the second Sunday in June.
In sum, Fifth Avenue is a 16-kilometer promenade that manifests the quintessence of New York: money. You can hear its stones, windows and facades whispering - softly and discreetly - that, yes, money can buy everything. Well, at least in New York.