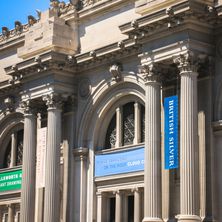 Since its establishment in 1870 the Metropolitan Museum of Art has been the Mecca of art in the New World. In fact, it has the biggest permanent art collection in the western hemisphere and it is the most visited museum in America. In the world it is ranked third in terms of number of visitors, after the Louvre in Paris and the British Museum in London.
The Met, as it is known among New Yorkers, was founded at a time when Americans were discovering their European roots and trying to introduce old-world charm and polish to the rugged American lifestyle. Wealthy families would send their children to Europe to study and get a taste of its cultural and aesthetic treasures. One of these Americans was John Taylor Johnston, who had studied in Edinburgh, Scotland and traveled extensively throughout the European continent. In America Johnston, having become President of the Central Railroad of New Jersey, was an avid collector of European and, later, American art. It was his collection that became the foundation of the Metropolitan Museum, whose first gallery was located at the corner of 5th Avenue and 54th Street. Johnson was also appointed as the museum's first president.
The monumental building on Fifth Avenue that stretches between 80th and 84th Streets is actually a conglomeration of different structures that were erected over a course of one hundred years, between 1880 and the 1980s. The original redbrick edifice was built in High Victorian Gothic style by Calvert Vaux. This structure, which disappointed everyone in New York at the time of its inauguration, was enveloped in 1902 by a Beaux-Arts building with the main façade that we see today, designed by Richard Morris Hunt. Then in the 1910s the architectural firm McKim, Mead and White added the two wings at the sides. The museum had to expand to accommodate its continuously growing collection. In the 1970s the firm Roche-Dinkeloo, which has been responsible for all the Met's additions ever since, built glass walls at the sides and the rear of the museum, allowing natural light to illuminate the artwork. In 1987 a roof garden was created for visitors to take a break from their cultural itineraries and enjoy a glass of wine and the exhilarating view of Central Park and the Manhattan skyline. The roof garden also hosts annual single-artist exhibitions. Today the Metropolitan Museum of Art contains 2,000,000 feet of floor space and measures 20 times larger than its original structure built in 1880.
The Met's permanent collection is immense: more than two million pieces. It is divided into seventeen different curatorial departments and is assisted by four conservation departments and a scientific research department. The museum also has two libraries: the Thomas J. Watson Library, which is used by the museum staff and researchers; and the Nolen Library, which is open to the public. The Met also hosts special exhibitions on a regular basis, displaying anything from the most recently discovered archeological artifacts to rare costumes to never before exhibited artworks from private collections.
The Metropolitan Museum of Art is one of the two most celebrated cultural institutions of New York City - the other is the Metropolitan Opera. It is the pride of New York and of American museology, and the reason is clearly stated in its mission statement: The mission of The Metropolitan Museum of Art is to collect, preserve, study, exhibit, and stimulate appreciation for and advance knowledge of works of art that collectively represent the broadest spectrum of human achievement at the highest level of quality, all in the service of the public and in accordance with the highest professional standards. To realize this mission the Met has a $2.7-billion endowment, which is the largest among cultural institutions in America. Only fifteen percent of operations is covered by admissions. The suggested cost of entering the Met, as of 2014, is 25 dollars. However, visitors can pay what they wish, and genuine art appreciators rarely contribute more ten dollars. There are 950 fellows and benefactors making up the private corporation that owns the museum's collections and 41 elected members making up its board of trustees.
The biggest controversy to have hit the museum in recent years was caused by the Met's decision to remove several paintings depicting the Islamic Prophet Mohammed, which is forbidden according to Islamic Law. The decision outraged most museum lovers and art critics alike in 2010, but was defended by the institution, which stated that such artwork indeed offends religious sentiment.