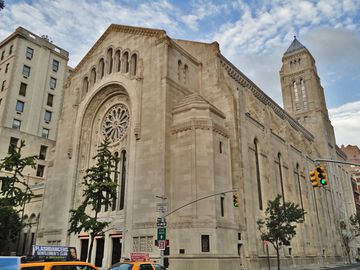 The Park Avenue Synagogue, which stands on 87th Street and is actually closer to Madison Avenue than Par k Avenue, houses a Conservative Jewish congregation. Today this congregation is one of the biggest and most influential in America.
Originally, when the congregation was founded in 1882 by a society of Jewish immigrants from Germany, the branch of Judaism that they professed was Reform Judaism. Their first synagogue, a converted Christian church, stood on East 86th Street, just a couple of hundred meters away from the current one. Reform Judaism tried to modernize and adapt the beliefs of Orthodox Judaism to the social changes in 19th century Europe. Jewish law, therefore, was not interpreted literally but was used only as a guideline for achieving a certain level of rectitude. In the 1930s the Park Avenue congregation, after merging with other New York congregations, changed its religious affiliation to Conservative Judaism, having assumed the name Agudat Yesharim, which means the Association of the Righteous. Conservative Judaism was a reaction to the liberally oriented Reform movement and strove to bring Jews back to a more traditional system of beliefs and practices. That is why today Conservative Judaism is a middle ground between Orthodoxy and Reform Judaism.
The Park Avenue Synagogue building was constructed in 1927 in Moorish style by Walter Schneider. It has an octagonal domed ceiling and provides seating for 1,200 worshippers. It is the most outstanding example of Arabesque architecture in Manhattan, not only for its façade but also for the intricate inner decorations. The synagogue therefore presents an interesting blend of cultural currents: architecturally, it refers to the Sephardic Jewish ethnic division, which evolved on the Iberian Peninsula and was greatly influenced by the seven-hundred-year Arab occupation; while the synagogue's rite is Ashkenazi, the Jewish ethnic division that evolved in Germany and Eastern Europe. Today the Park Avenue congregation consists of about 1,500 families.