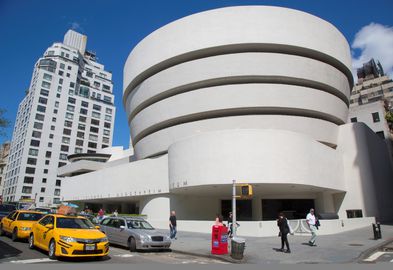 The Solomon Guggenheim Museum, or just the Guggenheim, as it by now known worldwide, is one of New York's most popular museums. In fact, it was and is one of the few international museums that is perhaps more famous for the building itself, rather than the art collection that the structure houses.
Solomon Robert Guggenheim was the fourth son of Meyer Guggenheim, a Swiss Jew who had come to America in the middle of the 19th century and made a fortune in the mining and smelting industry. Besides playing an active role in his father's business, Solomon also established the Yukon Gold Company in Alaska. Towards the end of the 19th century he began collecting paintings, first from the old masters, then the avant-garde works. On the advice of friend and artist Hilla Rebay, Guggenheim bought works from Wassily Kandinsky, Marc Chagall, Fernand Leger and other rising stars of modern painting. At the beginning of the 20th century he exhibited them to the public at his apartment in the Plaza Hotel on the corner of 5th Avenue and 59th Street.
In 1939 Solomon opened his first museum, the Museum of Non-Objective Painting on East 54th Street. Rebay became its director. But just a couple of years later Guggenheim's collection had grown so quickly, that the museum owner and director realized that they needed more space. It was then decided that the collection needed its own space, and not just any building that New York real estate offered at the time, but something special, some kind architectural phenomenon that not only would express the precepts of modern art, but would be a masterpiece in its own right.
To accomplish this Guggenheim and Rebay selected the leading American architect of the day, Frank Lloyd Wright. Wright began the project in 1944 and construction took 15 years. The Wisconsin architect had initially produced several sketches, suggesting that the building be constructed in red-colored stone, an idea that, unfortunately, was not approved by the clients.
Today from the outside the museum appears like a white concrete shell or a conch, with layers spiraling down, or up, depending on how you look at it. Inside, the layout preserves the circular, flowing shape of the external design. The atrium is illuminated by natural light coming from the glass dome. Visitors ascend to the top of the building by elevator and study the artwork as they walk down at their own pace along the continuous and almost unnoticeably sloping ramp. Wright had wanted the museum to be close to Central Park, not only because the location would be far away from the noise and chaos of the city but also so that the building could echo the principles of nature, such as infinity, progress and structural unity.
The museum opened in October 1959, six months after the death of its architect, immediately drawing lots of controversy. Some critics said that the building's monumental originality detracts attention from the artworks themselves. Other critics, as well as some artists whose works were part of Guggenheim's collection, said that the ramp's concave niches were not right for exhibiting artwork. First, the space was limited; second, the ceiling was too low and therefore preconditioned the size of the paintings and sculptures that would be exhibited; third, since the wall is curved and slanting downward, the paintings had to be tilted against it; and four, apart from the skylight illuminating the atrium, there was no natural light falling on the artwork because there are no windows. Twenty-one artists had even signed a petition, saying that they would not exhibit their works at the museum. Nevertheless, public opinion in general was very favorable to the innovative structure and the museum soon became an integral element of Manhattan, one of its main cultural landmarks.
Each new Guggenheim Museum director bought new collections, new paintings and sculptures. In 1992 the building was expanded with the addition of an adjacent tower and in 2005 it underwent major restoration, which made it as bright as it had been in the beginning. Today the Guggenheim's permanent collection consists of masterpieces from the Impressionist, Post-Impressionist, Modern and Contemporary schools. Besides the aforementioned artists, we can find works by Van Gogh, Cezanne, Gauguin, Manet, Mondrian, Modigliani, Klee, Picasso, Giacometti, de Kooning, Pollock and others. This collection is shared with other Guggenheim Museums throughout the world, such as the ones in Venice, Bilbao and Berlin.