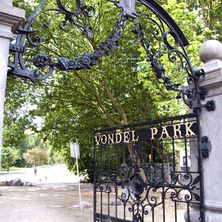 The Vondelpark, Amsterdam’s most popular green lung, is loved by both locals and tourists, and on sunny days is jam-packed with people picnicking, jogging, roller-blading, listening to a concert or just lazing about on thegrass.
In the middle of 19th century a group of prominent Amsterdam citizens formed a committee to createa public park. They raised enough money to buy 8 hectares of land and the landscape architect Jan David Zocherwas commissioned to design the park in the then fashionable English style. Zocher, known also as Zocher junior as he was himself a son of a landscape architect, worked with his son Louis Paul Zocher. Trained as architects in Paris and Rome, the Zochers used vistas, ponds and pathways to create theillusion of the natural world. Theyare also credited with designing the Keukenhofamong other Dutch parks.
Two years after the park openeda statue of writer and playwright Joost van den Vondel, one of the founders of Dutch literature, made by the sculptor Louis Royer, it was placedinone of the park's meadows. As a result, the locals started calling the park Vondelpark, literally Vondel's Park. In the end of 19th century, the park was officially rechristened Vondelpark.
In 1953, unable to meetthe park’s costs any longer, the abovementioned association donated it to the city. The park was renovated, children's playgrounds were added, and during the flower power era of the 1960s and 70s, the Vondelpark became renowned as the place where "everything is possible and (almost) everything is allowed". In the mid-1990s, the park was officially recognized as a heritage monument.
The Vondelparkwas built on a muddy patch of waste ground and has to be renovated every 30 years. This is because the ground level of the park is built on marshes and its grasslands constantly sink. If these rebuilding works were not performed, the whole park would eventually turn into a swamp. Among the trees in the park are planes, chestnuts, catalpas and different types of birch. Vondelpark is also home to many species of birds, wild ducks and blue herons among them.
In addition to the imposing 3-meter high bronze monument to Vondel, the park features a few more artworks, namely the abstract concrete Fish by Pablo Picasso and a bronze female figurine entitled Mama Baranka by Amsterdam’s own Nelson Carillho. Theatre and dance performances as well as music concerts are played on the Open Air Theater stage June through August. Admission is free, but some performances are so popular that on-line reservation via the park's website is well-advised.
During the 1990s, the number of visitors to the park had grown to approximately 10 million a year. Due to such intensive use, new intensive renovation works were necessary. After the park reopened, in September 2008, the city alderman planned to legally allow adults to have sex in the park, as long as they did not leave any traces afterwards and kept at a safe distance from the playground. The sex schedule was supposed to be limited to after dark. However, the city law enforcement announced that they would neither tolerate nor have the means to implement this, so the law was never adapted. In 2009, 433 picnickers gathered in the Vondelpark for what became acknowledged by the Guinness Book of records as the world’s biggest picnic ever.