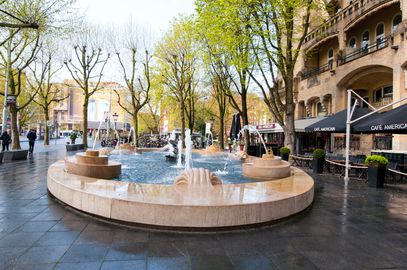 Arguably Amsterdam's second busiest square after the Dam Square, Leidseplein (or Leiden Square), is certainly the city's main entertainment hub, hosting theaters, cinemas, dance clubs, many bars and cafes, some of them featuring nightly live music, Amsterdam's most famous dance venues and restaurants of all types. Leiden Square is at its liveliest by night and at weekends, but is by no means dead even on a Monday morning, since both Leidseplein and the adjacent Leidsestraat are lined by numerous shops, stores and banks as well as the city's first Apple Store.
In the 17th century, the square was used as a wagon park wherefarmers left their carts and horses before entering the city center. The name testifies to the fact that this once used to be the gate to the road from Amsterdam to Leiden. The square has undergone massive changes over time, although some of the original buildings are still standing with their construction dates carved into their facades.
Nowadays the southern end of the square is dominated by the AmsterdamseSchouwburg, one of the city's main performance and festival venues, where plays, ballets and musicals are regularly staged. Completed at the end of 19th centiry by the architect Jan Springer, the AmsterdamseSchouwburg was the home of the National Ballet and Opera House until the latter moved to the Stopera at Amstel 1 in 1982. The new concert hall added to the back of the Schouwburg in 2012 features superb acoustics. Such international luminaries as Philip Glass, Isabella Rosselini and Steve Reich among others regularly perform at the Schouwburg. Whenever Ajax, Amsterdam’s renowned football club, wins a major competition, such as the national championshipora European title, they make an appearance on the balcony at Schouwburg to show off their trophy to the fans gathering below.
Crossing the street and heading south past the AmsterdamseSchouwburgyou will see the American Hotel. This impressive building dates back to 1902, was designed by architects Willem Kromhout and Jansen and is officially listed as a heritage monument. The hotel was named after an earlier building built by an architect who had studied in the United States. The dancer and spy Mata Hari spent her wedding night at this hotel in 1895 – today guests can stay in the Mata Hari Suite. A carved stone plaque on the Leiden Squareside of the hotel commemorates the original building. Café Americain, the American Hotel's grand café, is beautifully decorated in Art Deco style and is definitely worth visiting for coffee or lunch. The fountain in front of the Café American was built with the bequest of a Dutch dance teacher Hans Snoek. The fountain has the shape of a fish, namely that of a pike. Snoek, the last name of the deceased teacher, translates into English as pike.
Wander around the square and adjoining streets to appreciate Amsterdam’s wide choice of entertainment. In the winter months an ice rink is installedin the middle of the square to replace the summer wicker chair terraces and street entertainers that the city authorities invite to work the square. On the way to Max Euweplein you will pass De Balie, a café that doubles as a cultural center, regularly hosting intellectual debates and cultural events and acting as the center for Amsterdam’s intelligentsia. Across the square from De Balie rises the City movie theater. This fine example of Constructivist architecture was designed in 1934by Jan Wils, who had also designed the Amsterdam Olympic Stadium. In its heyday, City was the most modern of theaters with state of the art acoustics, air conditioning - which was previously unheard of - and a sprinkler system to prevent fires.About 50 meters past De Balieeastward you’ll notice a building resembling an old church. This is the Paradiso, Amsterdam’s oldest and most legendary dance and live music venue located, indeed, in a redundant church. In 1967 after the church was abandoned hippies moved in; the following year it became a publically subsidized venue. Due to the fact that almost every famousmusician has played this venue at some point in their career, it has earned the nickname the ‘Pop Temple’ among the locals.