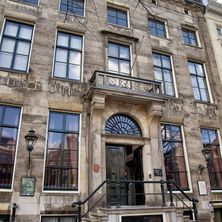 Hidden among the many canal houses that line the Amsterdam canal district, this magnificent private residence was built in 1672 by the architect Adriaen Dortsman. Its first resident was the most famous of Rembrandt's pupils - Ferdinand Bol. What makes this residence special is the interior of the house which has remained largely intact and still evokes the splendor of the Dutch Golden Age.
On display the visitor will see an impressive collection of paintings, original furniture, precious cutlery and porcelain. Behind the house one will find a beautiful garden, a quiet oasis in the midst of the bustling city center. On the far side, the garden is bordered by the classical façade of the coach house. This original unity of the canal house, garden and coach house is highly unique. If you're interested in getting a glimpse of the stately realm of the Amsterdam canal houses beyond their façades, then a visit to Museum Van Loon is a must.
Coaches would enter through the Kerkstraat which was built with coach houses in mind. Museum Van Loon is the only museum in the Netherlands where the original unity of a canal house, its garden and a coach house is preserved in its entirety. The Van Loon family owned one of the most renowned collections of carriages and harnesses, most of which have survived and are regularly on display.
The Van Loons were an aristocratic merchant family that originally came from the town of Loon op Zand, close to the city of ‘s Hertogenbosch in the south of the Netherlands. In the 17th century they moved to Amsterdam and from then on were involved in commerce and city governance, much like many other upper class Golden Age families. In 1602 Willem van Loon became one of the founding members of the Dutch East India Company and, later on, his grandson was elected the mayor of Amsterdam.This canal house came into possession of the family in 1884, when Hendrik van Loon purchased it for his son Willem as a wedding present. The family’s rich history can be gleaned from the large collection of portraits, the oldest one dating back to the 16th century.
Every third weekend in June, more than 25 Amsterdam canal houses that have back gardens open their doors and their gardens to the public. The original purpose of the gardens when they were being built in the 17th century was to be mainly used as orchards, to plant herbs and vegetables. Once Amsterdam denizens started to grow richer, decorative gardens had become the symbol of status. These days, however, there is a trend to return to the utility of the old days as city dwellers have taken to growing fruit, herbs and vegetables again. More information on the Open Garden Days can be found at: www.opengardendays.nl