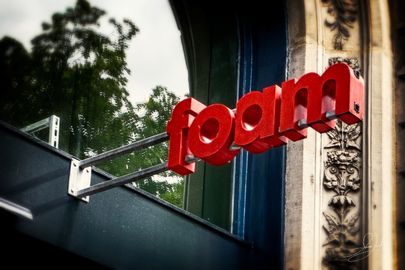 This small photography museum with an increasing international reputation stages regular retrospectives in photographic genres ranging from documentary, to art, to fashion. Alongside exhibitions by established and renown photographers, Foam also shows the work of young and upcoming photographers in shorter running exhibitions. The museum also runs a commercial gallery called FoamEditions, as well as publishes a quarterly photography review entitled Foam Magazine.
FOAM was officially inaugurated on June 6, 2002 and the first exhibition was attended by approximately 8000 people. Annually four large retrospectives are mounted in which attention is given to big names in the world of photography - icons that have been paramount in the history of the medium. Additionally, 16 smaller scale and varying in character shows are organized. These can either be work by relatively young photographers, site-specific projects or work that is currently relevant, such as presentations on new developments within the medium. Emphasis is generally put on documentary photography, street photography, portrait and glamour photography, as well as young and upcoming talent.
The monumental building on the Keizersgracht canal where FOAM is located used to belong to Carel Joseph Fodor (1801–1860). Not much is known about Fodor, except that his father, Antoine Fodor, was an eminent musician and the master of the Felix Meritis orchestra. The father could barely make ends meet playing music and took up work in the coal trade. Carel Fodor followed in his father's steps and turned his trade into a prosperous business.
At first Fodor bought the house at Keizersgracht 611. Later on he also acquired the adjacent warehouse and a residential home. Fodor started to collect paintings, drawings and prints from 1834 onwards. He preferred the artworks by his contemporaries, the 'living masters’, as he referred to them. Fodor soon opened his house to the general public and many art lovers and connoisseurs came to see his collection. In 1860 Fodor died under strange circumstances and various rumors surrounding Fodor’s death circulated over the city. Allegedly he committed suicide in the canal in front of his house. Others claim he was found dead in the warehouse.
Before Fodor died, he bequeathed his collection to the city of Amsterdam. He also left a large sum of money to be used to turn his house into a museum. In his testament, Fodor stated that the warehouse at Keizersgracht 609 shall become an exhibition space and named Museum Fodor. It should, he further added, be the permanent exhibition space for his collection. In 1861 the building was renovated and its doors were opened in 1863 to the public. It became the world's first precursor to museums of modern art.
In its early years the museum attracted a large number of visitors, but as the years passed, the numbers had dwindled. In 1948, its collection was stored in a depot and the museum became a branch of the Stedelijk Museum. In 1963, the entire collection was taken over by the Amsterdam Historical Museum. The Dutch Design Institute occupied the buildings between 1994 and 2001 before being taken over by FOAM.