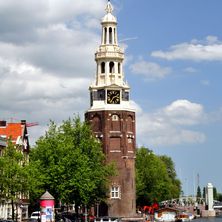 The Muntplein, or the Mint Square, is built atop a canal and thus is in fact a bridge, the widest bridge in Amsterdam across the Singel canal where it joins the Amstel river. All bridges in Amsterdam are numbered and the Muntplein is numbered as the first. The square is named after the Munttoren, the Mint Tower, which was once a gate to the medieval Amsterdam. During the 17th century it temporarily served as a mint, hence its name. The guard house building attached to the tower is not part of the original medieval structure but a late 19th-century addition. It now houses a Delft’s Blue showroom, where one can learn about the history and the making of the famous porcelain as well as purchase the crafts. The arched underpass was added to the building during the 1938–1939 renovation.
The square was originally called the Schapenplein (the Sheep Square) and, from 1877 to 1917 - Sophiaplein (after Queen Sophia, the first wife of William 3d). The name Muntplein has been in use since 1917. The south bank of the Singel canal is lined by the floating flower market where you can purchase Tulip bulbs, flowers, and souvenirs. As you pass under the Mint Tower’s archway, cross the street and keep left, you will enter Amsterdam’s bustling shopping drag – the Kalverstraat – which continues all the way to the Dam Square.