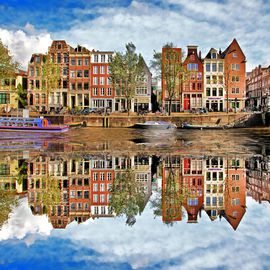 The "dancing houses" are just a few of the many canal houses or grachtenhuizen erected along the waterways of Amsterdam. In 2010 the grachtengordel (literally, the canal girdle), the Amsterdam’s canal district, was listed as a UNESCO World Heritage site. Construction of the grachtengordel was a massive undertaking and consisted of a half-circle of three concentric canals, Herengracht, Keizersgracht and Prinsengracht, each lined with canal houses, and expanding out from the first canal - the Singel - which veers off the Amstel river at de Munt and was originally a moat around the medieval Amsterdam. The houses, such as the "dancing houses", built for the wealthy bankers and merchants, sometimes did double duty, serving as both living and work space, with storage facilities in the attics. Built on a peat bog, most are supported by wooden stilts and were purposefully built so that the façade leans forward, in order for the goods hoisted up into the attic not to crash into the windows. This gives the houses the appearance that they are going to topple forward. Notice the hooks and pulleys in the decorative gables. To this day they are used to hoist furniture up, for the staircases in these old houses are often too steep and too narrow to even fit a kitchen chair through. The sideways tilt in these houses have however been caused by the foundations sinking unevenly over the centuries.